Comics I care about:

Every week a lot of comics come out. Of those comics there are a handful I’ll buy and hopefully like. A smaller more select set of comics are the ones that build some anticipation before Wednesday rolls around. Their history leaves you thinking about what will come next and their ongoing story has stakes, implications or simply a quality through-line you want to see developed.

Here are the comics I’m looking forward to this week: 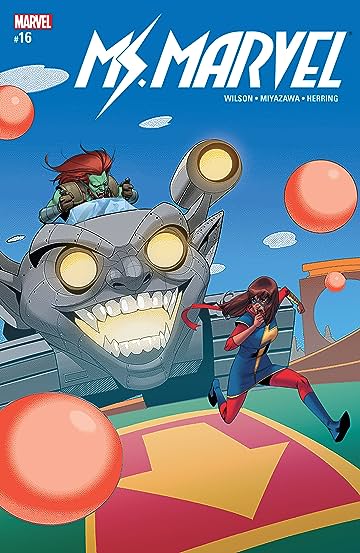 MS MARVEL #16 – I’ll always love Ms Marvel. As someone who is pretty devoutly religious, the caring considered introduction of a hero who shared some of the human tensions I experienced as a young person was much appreciated. Some of the conflicts that the first wonderful hardcover Omnibus of Ms Marvel contains are the differing values and cares of family vs friends, how they can respect one another but still be different, making choices for yourself in a world where structurally you’re outside of the mainstream because of your (or at least your family’s beliefs), BOYS etc, Canadian ninjas and the end of the world. It’s so so good and I highly recommend you read it. The art in that omnibus has a lovable humane whimsy that never hits that jokey “lol chimichangas” obnoxiousness level that I can’t stand.

The series and the character’s portrayal has hit a few bumps in the road. Different artists have different takes on Ms M and no one quite gets her like her original artist Alphona. The recent Civil War 2 crossover didn’t in its entirety do anything more for the character than any one of the small character moments in a few ‘non-plot’ one off comics where Ms M goes to a science fair or spends time with Spider-Man Miles Morales while he’s grounded.

The current arc is wrapping up and I’m eager to hear what G Willow Wilson is trying to do with this whole online bullying plot even as the arc feels maybe stretched a little thin and whatever it’s building to is currently out of view. 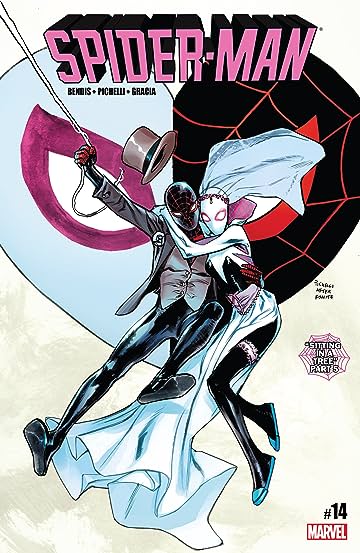 They should have called the current Miles Morales storyline Crisis on Infinite Kisses. I am not on board with the multiverse as a concept but it’s canon and nerds love that stuff so of course we’re going to have a multiverse story at some point. Bendis seems aware of a core criticism of the this whole concept of literally everything inevitably happening somewhere in a multiverse based on his Jessica Jones book that’s going right now.

If we accept the multiverse then we have to accept that every character is always kissing every other character forever. Infinite kissing, that’s just exhausting and airless. Not to mention meaningless. But I’ve already said too much. Go read Jessica Jones’ first 6 issues and see the golden nugget therein. The in world implications of someone agreeing with this criticism as a denizen of one of the infinite planes is uhh… a lot more like bleak nihilism than tumblr’s thirsty uses.

ANYWAY, this arc has an interesting structure. It starts with a finale first, Miles kisses Spider-Gwen. Told after the fact as a story to his roommates, of course he’d start with the kiss. But we haven’t gotten to it yet so I’m a sucker for this kind of thing. For how much I hate multiverses I do want to see what they are doing with the post secret wars status quo of a single universe. I’ll glean whatever I can from this book even if the current arc is not my fav. I want Miles back in New York asap.

I’ve been digging the separate Duke Thomas story-lines that have been running through the All Star issues. FIRST, I know what you’re thinking:

So he’s just a guy… but let’s not forget that’s how batman started. He’s a relatively new character. They are deliberately trying to keep him out of sidekick territory and right now that’s new enough for me to be excited about his shot at finding his own corner of Gotham. Since Batman is very established, seeing him teach is another way of letting us in on what he’s learned.

The main stories so far each have a bit of an involved hook. You can’t fault All Star for its ambition so this is a plus for me though other readers may think its in fiction fake science or inter-arc connective tissue are A Bit Too Much. (Art also great)

Tom King, what a guy. He’s got a pretty clear straightforward take on Batman. Batman is the triumph of the will (but like good and not that Nazi movie from 80 years ago). In his Batman #1 he sets a pretty big mission statement. For all the haranguing batfans have gotten about the obsession with the Dark and Gritty aspects of the character, King’s Gotham is still in some sense better than our world. #1 evokes 9/11 with its chase to stop a plane to building collision. Here’s the thing, Batman stops the plane (but he doesn’t save himself).

This is King’s world and 9/11, he’s been very open about, is a personal touchstone for his personal world. It was and continues to be a person and nation shaping trauma but a trauma that he doesn’t let happen to Gotham. That he has Batman not let happen to Gotham. So his world is brighter than ours for a moment, when Batman exercises his will to the full expense of his person.

The subsequent arcs remind you of the individual, unique terrors of Gotham (and even the goofy pageantry of the lesser set of rogues). Batman gets to care about Catwoman. They get to be happy together. Oh that’s ominous though isn’t it, the gritty hero with a smile.

So in the current arc Bane comes to Gotham and things aren’t looking good. #18 got incredibly explicit about the parallels between Bane and Bruce Wayne and it was a little too much. The whole “how other characters are just a shade away from Batman” thing works really well under the surface of the like-attracts-like dynamic of Catwoman and the father of the Bat Family thing that Bruce has going on with the other side kicks. But with Bane all that needed to be said was said at the end of the I Am Suicide arc when Batman, on completion of a Suicide Squad mission to steal a prisoner from Bane on his home turf, gives Bane a speech that about not chasing him in a rage. It’s an expression of understanding and an acknowledgement of their similar psychology. It was good is what I’m saying and hopefully #19 steps back from the whole sameness angle and shows us what King has planned for the inevitable divergence and tragedy this arc seems to be promising by giving Batman so many wins (and so much to care for).

This entry was posted in Uncategorized. Bookmark the permalink.